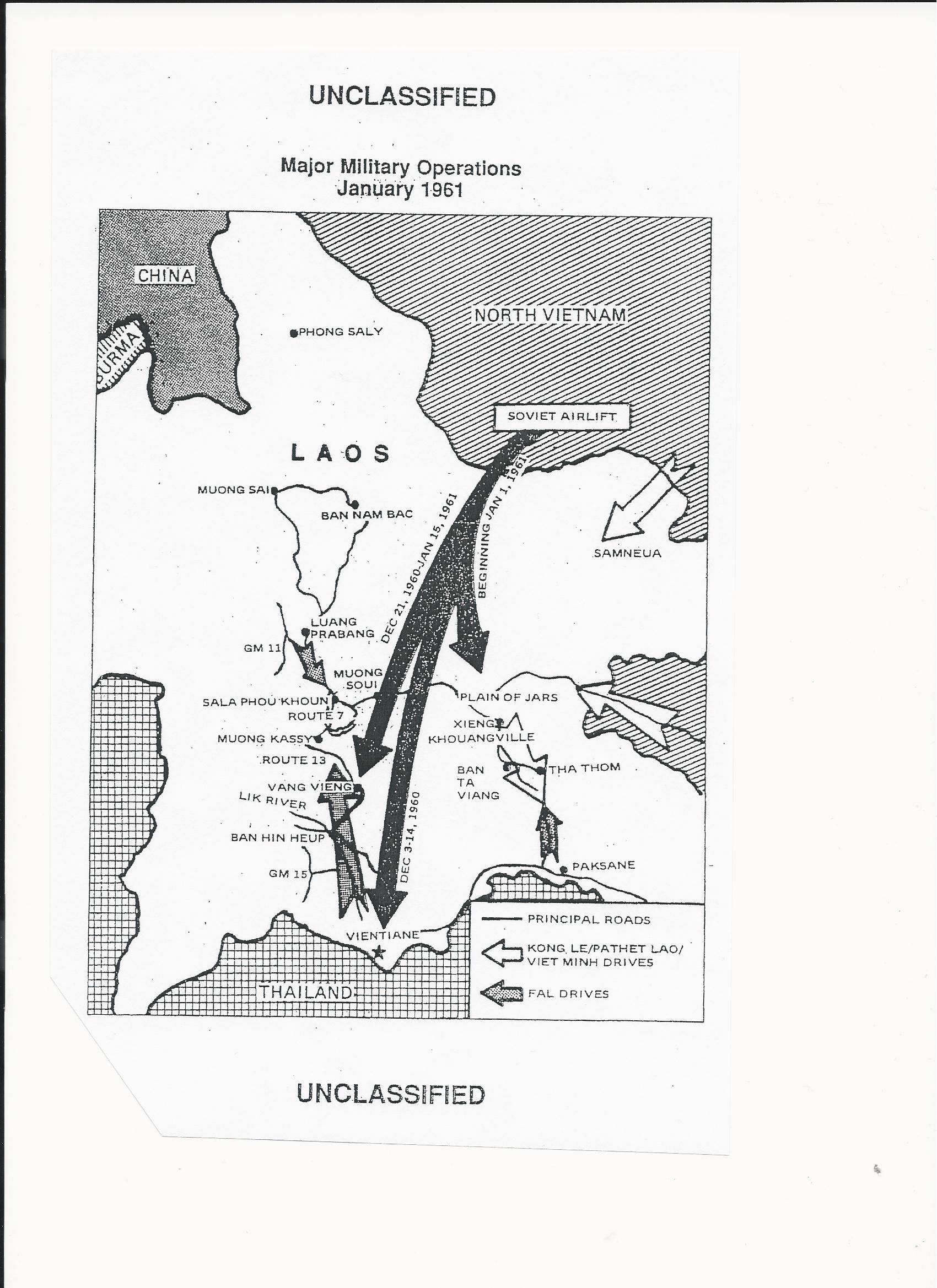 On January 19, 1961, the day before John F. Kennedy was inaugurated, he got a surprising piece of advice from the outgoing president.  In a private meeting, Eisenhower told him that Laos was the key to all of Southeast Asia, and if Laos fell the U.S. would have to “write off the whole area.”  Laos, a small landlocked country in the middle of the Southeast Asian peninsula, straddles both Thailand and South Vietnam.  Because of this location, its fall posed a threat to Thailand and, especially, to South Vietnam.  Laos would have to be defended, Eisenhower said, even if the U.S. had to do it without help from its allies.  Neutralization was out of the question.  “It would be fatal,” Eisenhower told Kennedy, “for us to permit communists to insert themselves into the Laotian government.”

By early February, it looked as though Eisenhower’s concerns had been justified: the military situation in Laos was critical.  Supplied by an ongoing Soviet airlift, the communist Pathet Lao already held the strategic Plain of Jars.  The U.S.-backed forces, commanded by General Nosavan Phoumi, were dangerously dispersed, defending the approaches to Vientiane, Luang Prabang, and the southern panhandle.  Kennedy ordered the formation of a Laos Task Force and asked for daily reports.  Rusk delivered the initial task force plan to the White House meeting on February 7, 1961.

There was a broad consensus among Kennedy’s advisors that the communists had to be stopped by force before a genuinely neutral Laos could exist, and that the U.S. should intervene militarily “if necessary.  A neutral Laos in which the Pathet Lao held the upper hand militarily posed the larger strategic problem of communist control of the Ho Chi Minh Trail, which would give them logistical access to Vietnam, Cambodia, and Thailand.  Thus, the plan called for defeating the Pathet Lao and declaring Laos neutral. 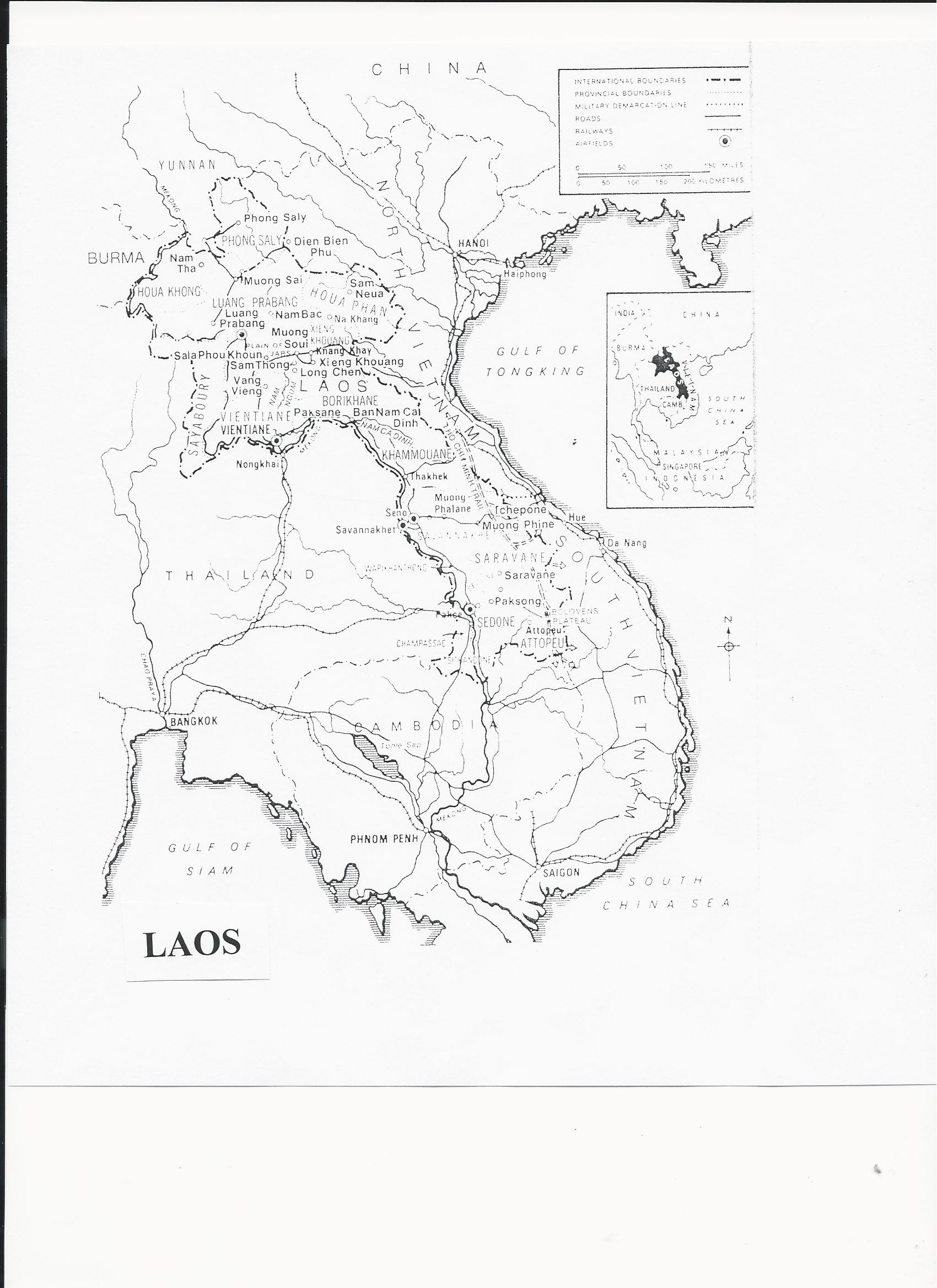 THE FALSE SNIE ON THE BATTLEFIELD SITUATION IN LAOS

The real crux of the plan was Phoumi’s offensive, and the Task Force recommended the plan because the U.S. intelligence community assured the members that Phoumi’s forces would have little trouble defeating the Pathet Lao.  This assessment was based on a Special National Intelligence Estimate (SNIE), which predicted Phoumi’s American-trained and financed forces would win against the Pathet Lao.

The Laos estimate was drafted at a low level of classification because the Air Force representative in the coordination process did not have certain security clearances. Officers in the Army Intelligence North Vietnam Desk had intelligence of a higher classification that refuted the thesis that Phoumi could win.  These officers went to the final coordination meeting, intending to clear the room of those without the right clearances and, using their information, turn the estimate around.  Their plan, one of them recalls, was thwarted by the SNIE’s drafter (Abbot Smith), who denied their request to clear the room.  Consequently, the CIA published the estimate in its original form; and based on this “military” advice—that there were limited North Vietnamese forces in Laos and that Phoumi could take the Plain of Jars in three weeks—Kennedy approved the Laos Task Force plan.

Of course, Kennedy was unaware of the critical information showing Phoumi would lose.  This intelligence lapse was tragic.  It led directly to a strategy that failed, a failure that narrowed the available policy options and moved the U.S. to the brink of war in Southeast Asia.

I first wrote about this matter in my 1992 book, JFK and Vietnam.  And although I did not say so specifically at the time, I was appalled and apprehensive about how JFK was given such a terrible estimate on the situation in Laos.  Over the many years that have passed since that book’s initial appearance, I have often wondered if JFK was deliberately misled in order to draw him into a full-scale intervention in Laos.