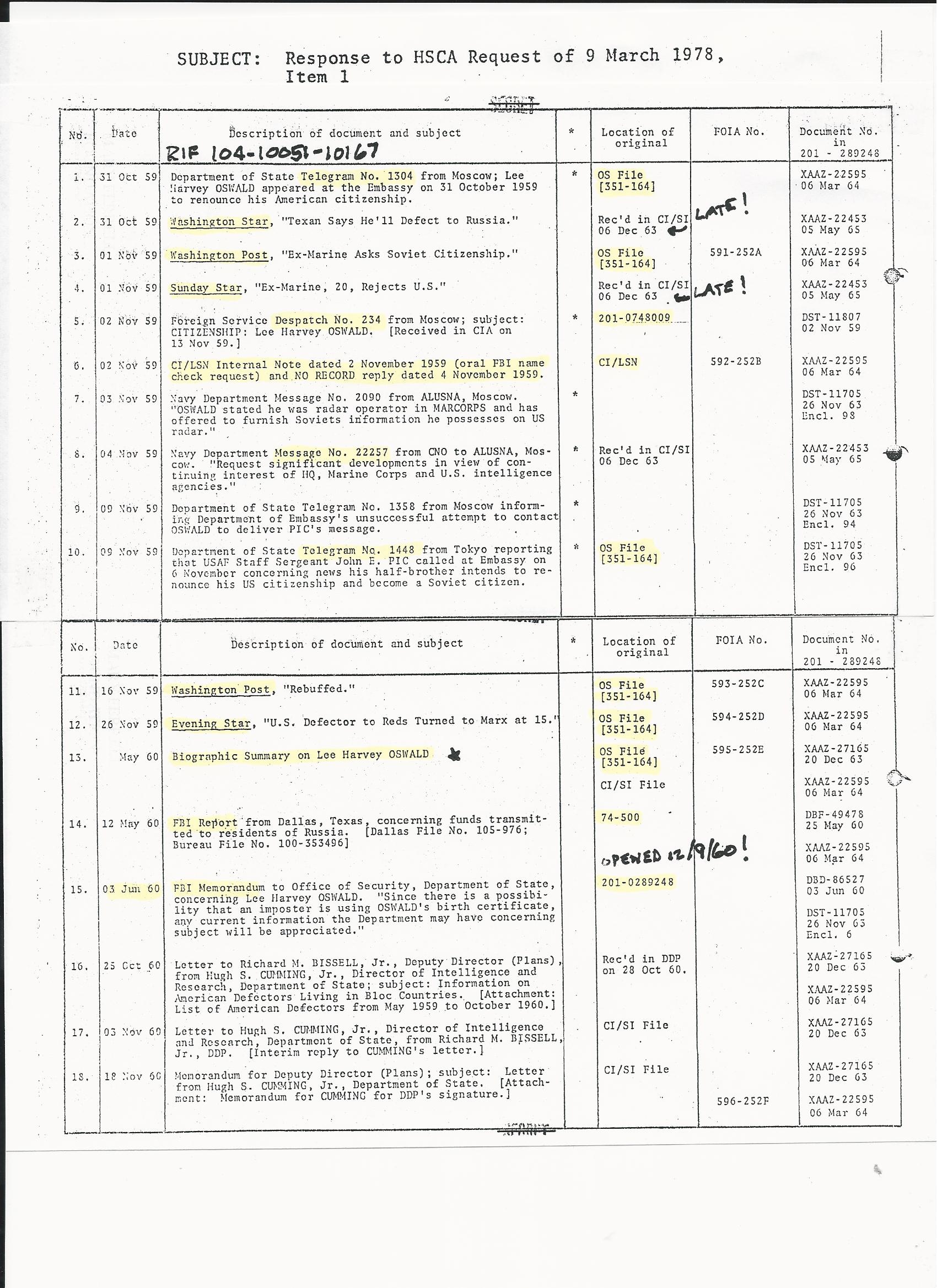 When you look at the original location of non-CIA documents on Oswald it is immediately obvious that they were not sent to the logical Agency component–the Soviet Russia Division (SRD) of the Directorate of Plans (DDP).

The normal internal distribution was altered, as the incoming documents were all sent instead to the Office of Security (OS) Security Research Staff (SRS) and placed in OS file 351-564.

The above list was one of two CIA documents lists on Oswald generated by a request from the House Select Committee on Assassinations (HSCA) in March 1978, a request that fell on the desk of the Director of the Office of Central Reference, H. C. Eisenbeiss.  For the HSCA request and the Eisenbeiss memo see the two previous pages.

A close examination of the above list indicates that the original press clippings on Oswald’s defection were not place in the counterintelligence mole hunting unit until December 1963–after the assassination.  That was not true, as the chief of the Security Office, Robert L. Bannerman, told me in a 1994 interview that CI/SIG worked closely with OS/SRS right from the start.  The branches in SRD, however, did not officially receive their first non-CIA Oswald document until May 1960, almost six months after his defection.  Bannerman’s comments can be found on p. 12 of Countdown to Darkness.

The entire story of mole hunt is covered in Chapter One.  In brief, Angleton and Bannerman did not want non-CIA document on Oswald sent to SRD because 1) they thought the mole was there, and 2) they hoped that Oswald U-2 flypaper in the USSR might induce the KGB to ask their mole to find out more about Oswald, and 3) any request for records on Oswald would therefore reveal the mole’s identity.

The above documents list also demonstrates how CIA documents can contain gross errors.  Notice the 2 November Foreign Service Dispatch original location of “07438009.”  That is a nonexistent CIA 201 number because it has too many numbers.  The first 0 (zero) is a mistake.  Moreover, the rest of the number–748009–is Richard Snyder’s 201 number, and his 201 file was not opened until 1964!