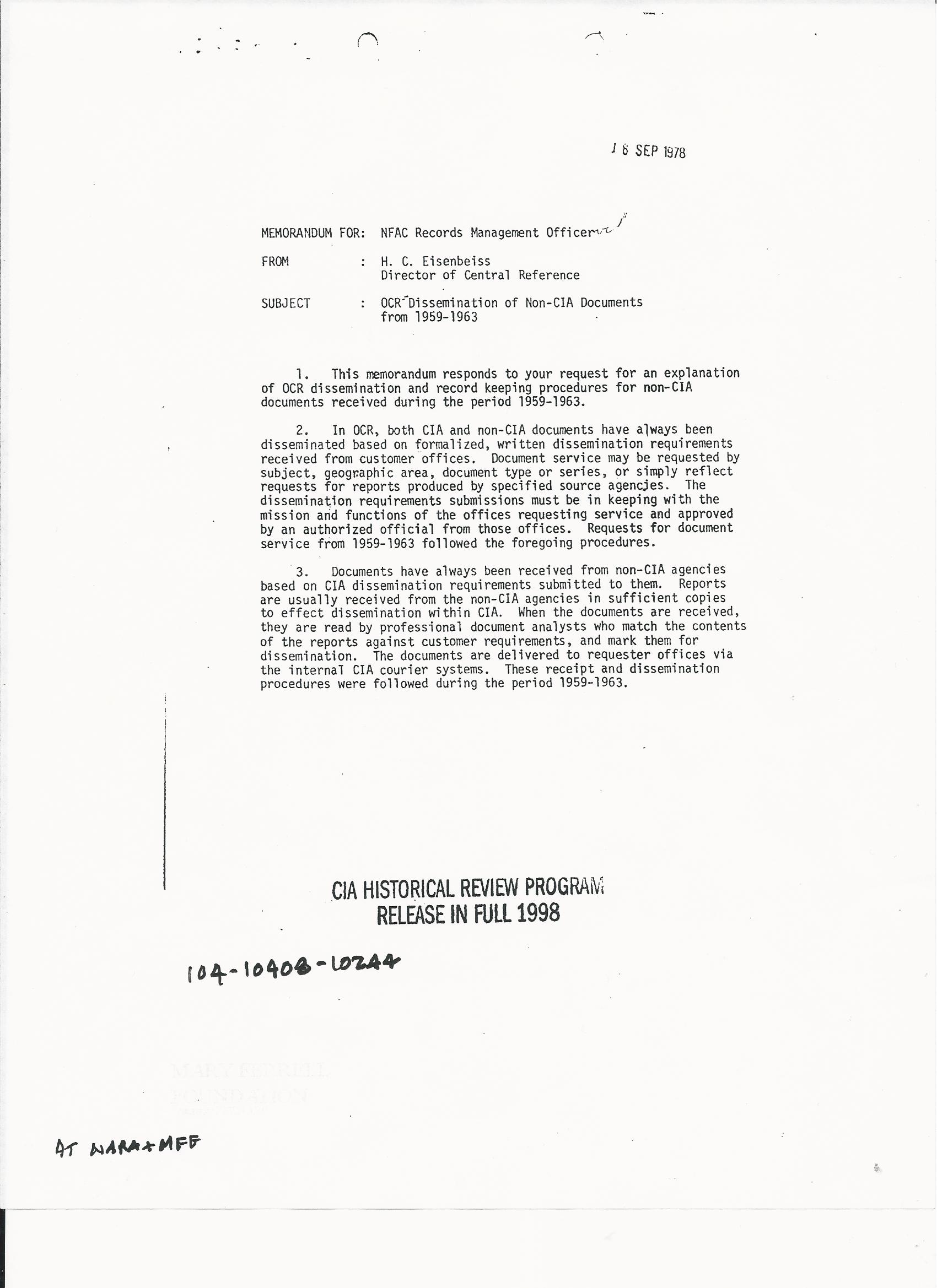 The Eisenbeiss Memorandum (I)

In September 1976, the U.S. House of Representatives established the House Select Committee on Assassinations (HSCA). On 16 September 1976, a CIA memo was prepared by H. C. Eisenbeiss for the National Foreign Affairs Center (NFAC) Records Management office, a component within the Intelligence Directorate’s (DDI) Office of Central Reference (OCR). Eisenbeiss’ memo was titled “OCR Dissemination of Non-CIA documents,” and its content was focused exclusively on Oswald’s records. Probably in anticipation of HSCA requests for files on Oswald held at the CIA, Eisenbeiss had undertaken the task of organizing those files in the hopes of reconstructing their original form and evolution over time.  Eisenbeiss located over 150 folders and heavy duty envelopes, and by the time he sent his memo to NFAC, he had reached this gloomy conclusion:

To reconstruct the file as it might have existed at any given point in the past is an exercise in futility. What happened to a specific document or documents is impossible to divine some fifteen to nineteen years after the fact.

Eisenbeiss found and attached to his memo a list of all documents on Oswald known to have been received in the Agency before 22 November 1963, either from its own field components or from other U.S. government agencies. Eisenbeiss said that all of the documents on the list were filed in Oswald’s “dossier,” but then made this curious observation:

However, they have not all been filed in chronological order according to the date of the document, e.g., Department of State Telegram 1304 dated 31 October 1959 was not filed as the first document. After an elapse of nineteen years, there is no satisfactory explanation as [to] why a copy of the State telegram does not appear in its logical place within
the file. 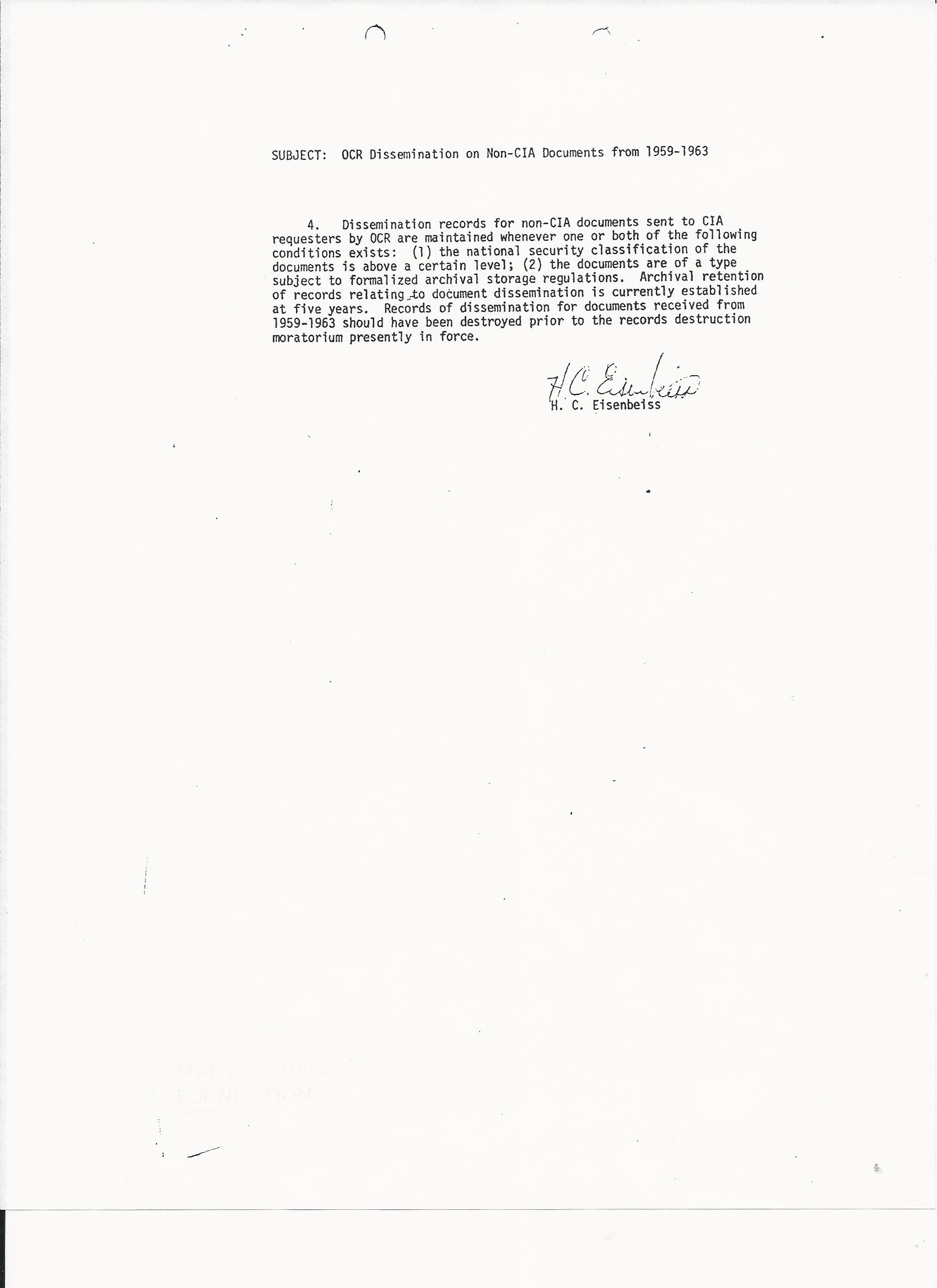 In 1995, I traced what had happened to the initial cables and dispatches from Moscow about Oswald’s defection as they arrived at the CIA, and how they were disseminated.  I noticed that, for six months after Oswald’s defection, none of these documents appeared in their logical place—the Soviet Russia Division (SRD).  This change in normal routing procedures suggests that the restriction of incoming Oswald files to the Agency’s OS/SRS was a pre-defection arrangement.  The CIA acknowledges that it received the Oswald traffic from Moscow, and document lists establish that this traffic was directed to a Security Office file, OS 351-164.  Although a few documents were placed in Oswald’s 201 file (289248) after it was opened in December 1960, his SO file remained the primary repository for documents related to him. Eisenbess’ emphasis about the first document (telegram 1304) not being first on the list is reasonable, but I find the original location of the documents far more than an exercise in futility. What happened to a specific document is telling.  If telegram 1304 was not in the right order, it was also in the wrong place—SRS (Security Research Staff)—due to the sensitive single channel arrangement designed to surface a mole in SRD.