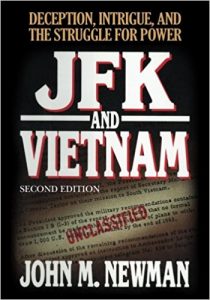 The publication and suppression of JFK and Vietnam was a watershed event in 20th Century American history.  This book exposed, for the first time, 1) how President Kennedy’s opposition to sending U.S. combat forces to Vietnam led those favoring intervention to concoct a false story of battlefield success to prevent a complete withdrawal from Vietnam; 2) the details of the intense struggle that erupted in the administration over the president’s decision to withdraw from Vietnam in the fall of 1963; and 3) how President Johnson’s key changes to a National Security Action Memorandum (NSAM 273) two days after the assassination opened the door to direct American military intervention in Vietnam.

In 1992, JFK and Vietnam received high praise from Publisher’s Weekly and Kirkus Reviews.  It was favorably reviewed by Arthur Schlesinger, Jr. in the New York Times Book Review.  Elsewhere the book caused a media firestorm with proponents of conflicting views making absolute declarations in opposition to Dr. Newman’s basic thesis: Kennedy was opposed to U.S. intervention in Vietnam and was withdrawing the U.S. advisors at the time of his assassination in November 1963.

The National Security Agency attempted, unsuccessfully, to block the publication of JFK and Vietnam.  Shortly after publication, the publisher, Warner Books, suppressed the book.  Six months later, the Galbraith family intervened with Time Warner Inc., and the copyrights were yielded back to the author.

JFK and Vietnam, second edition (2017), represents the continuation of Dr. Newman’s research and describes the fascinating sequence of events that unfolded following publication in 1992, including the consequential relationship that was formed between Dr. Newman and former Secretary of Defense Robert S. McNamara following the book’s debut.  That relationship led McNamara, after 25 years of silence, to publish his memoir on the Vietnam War–In Retrospect.  JFK and Vietnam, second edition, expands upon and adds to what so powerfully defined its original impact.

“This commanding essay in critical history is the most authoritative account anywhere of President Kennedy’s Vietnam policy–and it is fascinating reading as well.”  — Arthur Schlesinger Jr., Special Assistant to President Kennedy

“A brilliant, meticulously researched and fascinating account of the decision-making which led to America’s long agony in Vietnam. Mr. Newman has added to our history–and hopefully our modesty–as we approach the decisions of the future.”  —William E. Colby, former director, Central Intelligence Agency

“This great book brought to light the dark mystery of John F. Kennedy’s decision to withdraw from Vietnam. Celebrated on first publication, JFK and Vietnam has been confirmed by many new sources, witnesses, papers and tapes. This new edition is a triumph of history over evasion.”  — James K. Galbraith, The University of Texas at Austin.

“A breakthrough exploration of Kennedy and his generals, it deﬁnes the 1961-1963 period in a light I never understood before, Kennedy as divided, country as deceived-a breathtaking, ground-breaking document of America’s ongoing marriage with Vietnam.”  — Oliver Stone, director of JFK Where Angels Tread Lightly: The Assassination of President Kennedy, Volume I

“John Newman is one of this country’s greatest scholars on Cuba, the CIA and the JFK assassination. This book is a ground-breaking investigation of America’s failure in Cuba that uncovers the CIA role is Castro’s rise to power and their ensuing efforts to destroy him. It exposes the genesis of one of America’s darkest deceptions — the myth that Castro was responsible for the assassination of President Kennedy.”  — Eric Hamburg, Producer, NIXON film and former aide to Senator John Kerry

“John Newman has done more to advance the work begun by the House Select Committee on Assassinations to explore the CIA’s connections to Oswald than anyone else. Where Angels Tread Lightly is a meticulously researched, in-depth account of U.S. policies and operations during the late 1950’s and early 1960’s that were designed to eliminate a perceived communist threat in Cuba, but instead brought together the forces that eventually led to the assassination of JFK. This extraordinary volume shines new light on the CIA officers and operatives who were involved in those operations.”  — Dan Hardway, investigator, House Select Committee on Assassinations Countdown to Darkness: The Assassination of President Kennedy, Volume II

“This is a definitive study of the disastrous hand-off from Eisenhower to Kennedy on Cuba, Laos, and the Congo — by the man superbly qualified to carry it out.”  — Peter Dale Scott, author of essential works which include The War Conspiracy, American War Machine, The American Deep State, The Road to 911, Deep Politics and the Death of JFK. His most recent book on American history is Dallas ’63: The First Deep State Revolt Against the White House

“This important new work on the roots of the JFK assassination delves deeply into the deception and intrigue during the buildup to the ill-fated Bay of Pigs invasion. Newman examines the shocking conflict between President Kennedy and the Joint Chiefs of Staff over Laos and Cuba, and offers a dramatic introduction of Lee Harvey Oswald and his probable role as a false defector to the Soviet Union.” — Bill Simpich, author of State Secret: Wiretapping in Mexico City, Double Agents, and the Framing of Lee Oswald

Countdown to Darkness presents the case for Oswald as a witting false defector to the Soviet Union. If proven, this stands history on its head. Professor Newman also presents a detailed account of President Eisenhower’s stunning triple-play directives to eliminate Trujillo, Lumumba, and Castro. It is time we came to grips with this history. — James H. Lesar, president, Assassination Archives and Research Center Into the Storm: The Assassination of President Kennedy Volume III

If we are going to make America great again, we need to start by understanding our own history.  John Newman is uniquely qualified, as a distinguished historian and a highly experienced intelligence analyst, to illuminate that history.  His research is an order of magnitude ahead of all others in the field.  This book is the deepest dive yet into the secret story of the Kennedy years and the dark forces that led up to his assassination.  Into the Storm is epic and cinematic in its sweep and scope. —Eric Hamburg, Producer of Nixon film, and former aide to Senator John Kerry and Representative Lee Hamilton.

Dr. Newman’s review and analysis of the now available documents is insightful and well-documented, shedding new light as well as testing things we thought we knew about the history of early 1960’s America. Every serious student of this era should carefully consider this work.  I highly recommend it.
—Dan Hardway, former HSCA investigator.

By centering his third book—Into the Storm—on the repeated misstatements of three men—Yuri Nosenko, Antonio Veciana, and Sam Halpern—Newman puts the roles of David Phillips, Bobby Kennedy, and the U.S. intelligence community into sharp focus.  Now our work can continue on sure footing.

Into the Storm turns so-called “settled history” inside out.  Major Newman once again challenges the prevailing orthodoxy and forces us to question, with much greater focus, “facts” previously taken for granted.

Into the Storm: The Assassination of President Kennedy Volume III provides insights, details, and revelations about the absolutely essential question of context: What was the true nature of the national security state during the era of President Kennedy’s public service?

New in this volume:
* Retracing the 1960 presidential campaign and the extraordinary interconnections of JFK, RFK and MLK Jr. which literally created a foundation upon which all of the history that followed was based.
* JFK’s preparations as president-elect for executive leadership as he planned “The New Frontier.”
* Cuban policy aftershocks from the disastrous Bay of Pigs invasion leading up to the Cuban Missile Crisis.
* Shake-ups within the Pentagon and CIA.
* The administration’s handling of the Race issue during the Freedom Rides and the violent response to desegregation laws throughout the southern states.
* KGB-CIA spy wars and Cold War conflicts over Berlin and Cuba.
* The decades long defamation of RFK by senior CIA officials and journalists whose lies have gone largely unchallenged until now.
* The intricate web of claims, contradictions and complexities relating to the former leader of the anti-Castro paramilitary group, Alpha-66, Antonio Veciana, and how our pursuit of truth is better served through careful analysis of declassified U.S. military and CIA records than by simply embracing unproven stories that we might want to believe are true. Veciana’s 2017 memoir, Trained to Kill: The Inside Story of CIA Plots Against Castro, Kennedy and Che, represents his most recent telling of his own story. For the first time, Dr. Newman does what others have failed to do: He postpones any assessment of Veciana’s explosive claim that he was present in Dallas, Texas at a meeting in September of 1963, two months prior to President Kennedy’s assassination, with Lee Harvey Oswald and an agent/handler whom he knew by the name of Maurice Bishop (eventually identified by Veciana as CIA officer David Atlee Phillips), and instead, begins at the beginning of the story.

In an eloquent endorsement of Into the Storm, Robert F. Kennedy Jr. refers to Dr. Newman’s book as “…a groundbreaking work that finally illuminates the dark places where democracy goes to die … he here exposes the momentous official lies that for fifty years have been corroding the heart of American idealism.”

Dr. John M. Newman is Adjunct Professor of Political Science at James Madison University. He is a retired U.S. Army intelligence officer who served for two years as Military Assistant to the Director, General William Odom at the National Security Agency. He has testified before various sub-committees of the U.S. House of Representatives, worked as a consultant on two major motion pictures, Oliver Stone’s JFK (1991) and Nixon (1995), and to various U.S. and foreign media organizations including PBS Frontline, the History Channel, C-Span, NBC, and other news agencies. His experience and expertise as a strategic intelligence cryptologic analyst make his qualifications and credentials unique among those who delve into the hidden histories buried within America’s military and intelligence bureaucracies. For the past quarter century his works have overturned orthodoxies, broken new ground, introduced new facts, and produced revelations about America during the Cold War. His publications include Quest for the Kingdom: The Secret Teachings of Jesus in the Light of Yogic Mysticism (2011), 2017’s second edition of JFK and Vietnam, 1995’s Oswald and the CIA which was updated and expanded for reissue in 2008, and his current five or six volume series on President Kennedy’s life, the times in which he lived, and the true circumstances and meaning of his death, Where Angels Tread Lightly: The Assassination of President Kennedy, Volume I (2015, 2017); Countdown to Darkness: The Assassination of President Kennedy, Volume II (2017) and Into the Storm: The Assassination of President Kennedy Volume III, published January, 2019.

This is history in the making. Absolutely essential must read. Highest recommendation.